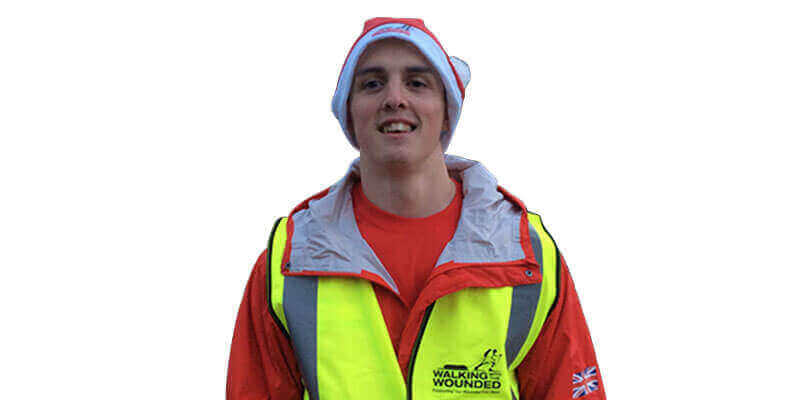 Sean served as a gunner with 26 Regiment Royal Artillery for 6 years, leaving  the Army in January 2014.

In 2013, whilst still in the Army, Sean was diagnosed with mild to moderate hearing loss and tinnitus which was service-related although not related to his discharge and was identified following an MRI scan, to be as a result of blast trauma whilst on operations in Afghanistan.

Shortly after being discharged, Sean was referred into Walking With The Wounded’s Project Nova, an early intervention programme to identify those vulnerable veterans caught up in a cycle of low level anti-social and criminal activity to prevent further downward spiral.

Following several meetings with his Project Nova Co-ordinator regarding his work aspirations, Sean was referred into the Step into Health programme and following attending the Information Day, met with Julia Watling, the Programme National Lead, to discuss a career within the NHS and his areas of interest for a work placement.

Following this meeting his bespoke placement was put in place and he completed two weeks at the Norfolk & Norwich Hospital.  The placement helped him to identify his future career aspirations when he was placed in a physiotherapy department in February 2015.

Sean made the decision to work towards becoming a Physiotherapist.  In September 2015 he successfully secured a place on a one year Access To Higher Education Course: Science for Health Practitioners at City College, Norwich, where he is currently studying Chemistry, Biology and General Science.  After this Sean hopes to be accepted into University so he can continue his training to become a physiotherapist.

Sean admits to not being particularly academic whilst at school, but he gained several NVQ’s whilst in the Army and has the enthusiasm and determination to succeed in his current learning.

In addition to his studying and his commitment to the Army Reserves, Sean also works part-time as a support worker for a local specialist day and residential school for children with communication and learning challenges, which he finds very rewarding.

Sean said, “Walking With The Wounded, Project Nova and Step into Health have all given me a lot of support and direction. The harsh reality is that without this support I would probably have ended up in Jail.
My biggest achievement is having been accepted onto the Access Course. I have a keen interest in the subjects and I hope to go on to train to become a Physiotherapist working within the NHS.”