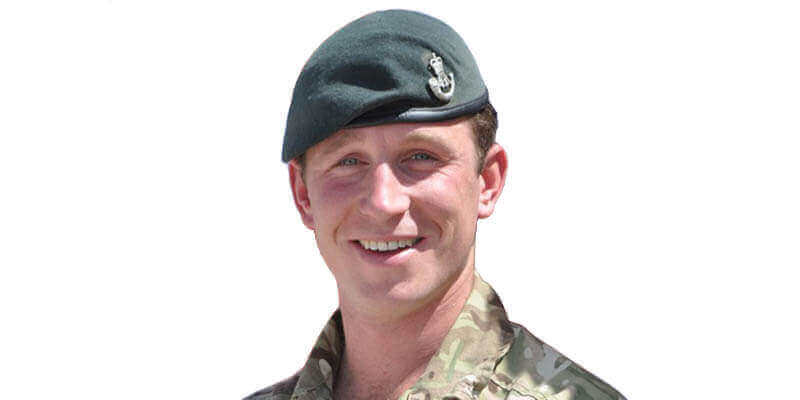 Palmer commissioned from the Royal Military Academy Sandhurst in 2006 and joined the Rifles on completion of his Officer training.  During his time in the Army Palmer did a number of tours including Kosovo in 2008 and two tours of Afghanistan in 2009 and 2012.

Palmer was discharged from the Army in November 2014. Whilst in service, Palmer was diagnosed with PTSD as a consequence of specific incidents that had taken place in Afghanistan.

Palmer’s PTSD can mean that his sleep pattern is often disturbed with recurring nightmares of two specific incidents whilst on operational tours of Afghanistan involving IED’s (Improvised Explosive Devices). The nightmares always end in the same manner and relate to some of the men who lost their lives whilst serving with him.  “I have lost some of the best soldiers I ever had the privilege of serving with.”

These issues can make Palmer’s personal life difficult and he feels it can be hard to share or understand emotions.

In May 2014, as part of his resettlement entitlement, Palmer attended a Step into Health Information Day and decided to apply direct for a role which was available within the NHS at the time.  He was unsuccessful in the application and took the decision to sign up to the Step into Health programme.

Following a 2 week work placement during which he had the opportunity to show his transferrable skills and explore the opportunities available, Palmer was advised to apply for another role which was coming up.  He made the application with the guidance of the Step into Health team and hospital staff and secured an amazing role at the Norfolk & Norwich University Hospital Trust as Assistant Director in the Diagnostic and Clinical Support Services Department.

Palmer has continued to be engaged with the Step into Health programme and has mentored a number of other applicants throughout their work placement. He said, “Step into Health provides excellent experience seeing what the NHS has to offer, both professionally and personally. It gives you a pathway and someone to guide you in finding an area of work you’ll enjoy. As military, we are excellent at knowing what we don’t want to do, but have little knowledge of knowing what we do want to do! The programme guides and facilitates work placements to suit you, and helps find an area you’ll continue to enjoy working in.”